*** I have updated the price to get this moving. Driveway is full and toys are plentiful, so I made a deal with my wife that this will go away. Come and get it. Read through the long list of mods and how little they have been put to use. I know mods are not worth what they are new - but I think this is a great deal to get into a Rover or add to pack or even take all the mods and transfer to another vehicle and sell this as a stock truck with swaps and make money. ***

I am the third owner of this car. I knew the second owner personally who bought this back in 97 or 98 and I bought it from him in 2014 or 2015. I bought it from him at 80,000 miles and now it has a whopping 109,000. Car has been in one accident. My son rear ended a tiny car in front of him and took out the drivers side off-road light. Very little other damage due to the Aedofab front bumper.

I am selling this because my son needs a car with better MPG to go back and forth to school and get to his job. He used it for his summer job last year and would burn a day’s pay on gas getting there and back. We have other toys we play with, so this one is going to have to go.

From an off roading perspective, the guy before me did the bumpers, sliders, roof rack, OME 2” lift, winch and snorkel. He never took it off road. Maybe some light dirt road stuff. He just babied it. I bought it from him and at 80k miles added front and rear HD dual-cardon drive shafts, Ashcroft HD rear axles, 4.10 years and Detroit Rear and Tru Trac front. I took it off road once. You can see the footage of the one trip to Moab on my Youtube channel. Don’t confuse it with my previous green Land Rover. .

I didn’t take the time to get this all detailed up. You are seeing honest, real pictures from it sitting in the driveway for the last 9 months or so while my son was away at school. I drove it every now and then, and he did when he came home to visit.

If I had no other toys and wanted to wheel, I would slap on some 33’s, do some trimming, and have a blast. But, since I ride dirt bikes and have a RZR, I just decided to keep this looking cool around town instead and avoid body damage. This truck can go two ways – ignore the rust that I talk about below which is mainly superficial and get to wheeling. Or, invest a little bit and bring it back to how good it looked in the videos before the rust started to creep over the past 8 years.

Aedofab Front Bumper. Rear Bumper & Gas Tank Skid, Rock Sliders, Sway Bar Disconnects​
Warn Winch​
Pioneer Head Unit (I don’t have the stock one, I dropped it an broke it)​
4.10 Gears – I think GBR​
Front and Rear HD Double Cardon Drive Shafts. Rear is Great Basin Rovers, I think the front is Tom Woods, not sure.​
Ashcroft HD Rear Axles​
Yellowbox Speedomter adjuster to make speedo and odometer correct with 4.10 gears with 31’s​
31” Goodyear wranger MTR’s on 15” steel wheels​
Oil Pressure Gauge​
One off road light up front (wiring for lights is disconnected)​
Safari Guard Diff Covers​
CO2 Tank Mount (Tank not included)​
The sub and rear amp are not included. I did replace the rear door speakers with upgraded ones.​
Aftermarket Exhaust​
​
I will include any manuals or spare parts like oil filters I may have around.​
Recent Maintenance

New Battery​
New Plugs, Wires, Distributor Cap​
Used Replacement Alternator Installed, I have a rebuilt one that comes with it​
All the fluids and such are recent.​
Brakes/Rotors with 5k miles or less​
Most of the oil hose lines were replaced at around 85k miles as they were leaky​
Fuel Pump & Filter​
Could be other items I am not remembering. I didn't do much DIY as my friend is a mechanic and I always take it to him.​
​
Issues
As you can see in the pictures, rust is making its way in. I had the rear bumper powdercoated after I bought it, so it is fine, but the rock sliders, front bumper, and steel wheels all show surface rust. I would sand them and hit them with rustoleum stuff that converts rust to look like the black paint. Or, take it all off and go see a powdercoater.

As for the undercarriage, my friend did have it undercoated years ago before I bought it. As you can see in the pics, it has held up well in terms of frame rust. The frame is solid. The main rust you see on the side is the rock sliders which need touching up as stated earlier.

Door frame rust is worse on passenger than driver rear door, but both have started. You can see where the ladder and door hinge rust is in the pictures.

It has normal seepage on things that you would expect for a Rover this age. It sits on my driveway in the same spot and there is not an oil slick everywhere, so nothing to worry about.

Interior – headliner is sagging and the drivers seat needs work as in the pictures. You kind of “sink into it” when you sit down.

Finally, if this sits for more than a week or two, the battery does get low. I bought the new battery to see if that is the issue, and it is not. So, you may have to look into a parasitic drain on the battery. I have just been keeping it charged when not in use with a charger.

The spare tire is for show. It is flat and can't be repaired. The other tires all work fine, but they were on it when I bought it back in 2015. They could be considered too old to use but they work fine.

The oil pressure guage is no longer working, but no pressure light is on. This is installed after what would light up the dash.

ABS light was coming on so I pulled the fuse. Have driven it like that since I bought it and never tried to fix it.
Last edited: Aug 4, 2022

And now for the pictures.... 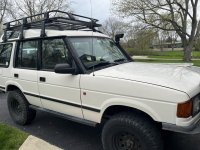 Last but not least...

I must admit I either expected interest or to be told my price was crazy and get the normal discoweb flogging. Surprised to hear nothing on this. Any feedback? Lay it on me.

Its a nice truck at a nice price. Might be a little too modified for something like cars and bids, but thats where'd you'd get the most action.

I think your asking price is fair. Court just awarded me $13k in restitution for mine (drunk driver/no insurance). The value of clean, slightly modified D1's is going through the roof. Good looking sled you have there and good luck with the sale.
Last edited: Monday at 12:56 PM

CBiDrive said:
The value of clean, slightly modified D1's is going through the roof.
Click to expand...

Good to know in case my ‘96 D1 totally stock goes on the block. 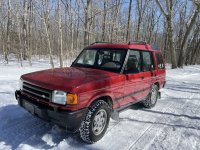 CBiDrive said:
I think you asking price is fair. Court just awarded me $13k in restitution for mine (drunk driver/no insurance). The value of clean, slightly modified D1's is going through the roof. Good looking sled you have there and good luck with the sale.
Click to expand...

Point that drunk in the direction of my driveway.
Reactions: Al415 and rover rob

Blueboy said:
Good to know in case my ‘96 D1 totally stock goes on the block.
Click to expand...

Now that is pretty. If it is a manual you are sitting on a good chunk of coin (even if not). If I didn't already have my replacement stripped in the garage, I would be all over that red one.


RVR OVR said:
Point that drunk in the direction of my driveway.
Click to expand...

RVR OVR you can have him. This build is going to take forever. Only had the last one on the road for 4 months. Got 15yrs of upgrades to switch over, plus replacement parts. There is always the case of "while I have it apart I might as well do this" action to help extend the job.

Damn, that red one is nice. The plastic is still black!

Thanks. Original paint which is a pita to keep up. Plastic easier.

Blue said:
Damn, that red one is nice. The plastic is still black!
Click to expand...

CBiDrive said:
Now that is pretty. If it is a manual you are sitting on a good chunk of coin (even if not). If I didn't already have my replacement stripped in the garage, I would be all over that red one.


RVR OVR you can have him. This build is going to take forever. Only had the last one on the road for 4 months. Got 15yrs of upgrades to switch over, plus replacement parts. There is always the case of "while I have it apart I might as well do this" action to help extend the job.
Click to expand...

Thanks. Auto box. Its the Rover driver versus the ‘94 Rangie garage queen although that truck has been in many Countries off-road. Hannibal’s trail in France to Italy. 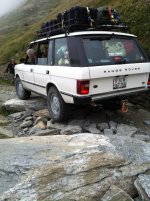