I'm having a difficult time troubleshooting this code on my rover. It started out as something that would happen intermittently and restarting the truck was good enough to fix it. It got a little worse, so I replaced the brake light switch, and lights which gave me about another week before the same error code would come back. Now, the code is permanently on unless I'm on the brake

With the car OFF, brake depressed, the two circuits (Brake Lamp Switch and Brake Switch) both show "active". When I release the pedal, the Brake-lamp-switch returns to an "inactive' state and the brake-switch remains active. This causes the fault. At the same time, the shift-interlock clicks once to release when the brake is depressed but does not re-lock when, in park, and foot off the brake. I can shift freely without using the brake (again, because he circuit is "active").

I've found other reports of this which lead to a corroded or broken "red" wire but I'm not finding any of that. I'm also not seeing the link to be based on pictures and diagrams from others. I've scanned from the passenger side B-piller up into the kicker panel so far, along with a little behind the battery. Nothing appears broken, nothing is obviously rusted.

Could this be anything else? 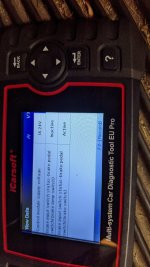 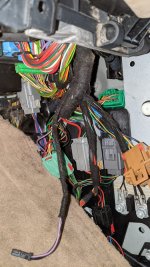 To close the loop, the red wire that feeds the brake switch is broken/corroded between the switch connector and fuse box.

I needed the truck back on the road so I jumped the circuit at the switch and am back in action. I'll hunt down the rest of the wire once I have more time.
L

I had a similar issue. Mine was corroded at the connector. I think I have pics somewhere but am currently traveling so I’ll need a few days to find them.

I was able to source new connectors and bought a few extra to satisfy the minimum order. I’ll see if I have any left. I’ll check when I get back to town later this week
L

LR3 8 pin connector for the 3 Amigos

I had a corroded connector creating the HDC/Transmission fault special programs off, etc. This is the problem that is created by a bad brake light switch, wrong bulbs, bad splice, or corroded connectors. I was able to find the proper Tyco AMP TE connectivity connector and have a few extras if...

www.defendersource.com
You must log in or register to reply here.