Hey everybody,
Some of you may remember me, I used to participate in here a lot but I haven't been around much in years. This is a long story, I'll try to be brief.
In the summer of '08 I bought this G4 from Red Mountain Rovers: 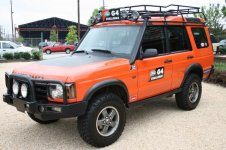 The next summer we went on our last canoeing/camping trip before we began building our new house. As we were packing up to leave, we were caught in a terrible hailstorm. The hail was the size of baseballs. We were camping at a beautiful state park called Pine Lake, as the name suggests, it had many beautiful white pine trees. Had them. The hail stripped the pines. And pummeled our G4, camper and dirt bike. 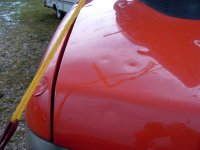 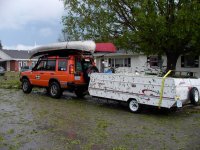 I needed to start house construction so the G4 went into storage and life went on. Several years later I saw a silver '03 at a repair shop with the telltale hood on the safety latch. I inquired and the truck had overheated. I bought it for a body panel donor vehicle. After a while I decided it was too nice of a truck to part out and I bought a junkyard engine, had my machine shop freshen it up and put it in the silver truck. 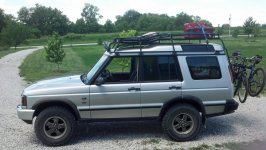 I drove this for a couple of years when it started to get hot intermittently. Because of the intermittentness it was hard to diagnose. New radiator, water pump, thermostat, and more I'm probably forgetting later, it was getting hot all the time-slipped liners.
I decided it was time to restore the orange truck. I pulled out the interior, swapped easily removable panels and sent it to the body shop for PDR. 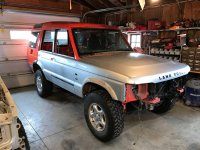 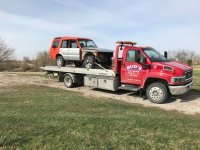 The PDR was completed (expensive!) and it was ready for paint. Then we found out my wife has cancer. The project was halted and back into storage it went. That was a couple of years ago.
Now I don't know if I will have the time or motivation to complete this project. This is it's present condition. 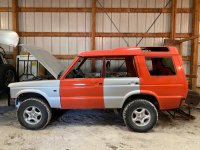 Years ago someone on here gave me an email contact of a JLR person who helped him with the provenance of his G4.
Here is an excerpt (contact info removed) from an email exchange I had with Mr. JLR regarding my truck:

the vehicle was not despatched until August 2003 and was one of a number of vehicles sent out as a promo vehicle for the USA to captilize on the 2003 event.

I an the second owner. The email shows the first owner was in Florida. The condition of the undercarriage reflects this.
I thought I would always keep this truck even after the hailstorm. Life changes. Now I don't know when I will find the time or motivation to finish this project.
For sale is the orange truck, the silver truck, all the parts that are on them or came off them including the roof rack, two snorkles, bumpers, & rock sliders. Not the canoes.
I am in Des Moines. The trucks are about 40 miles north of here. If anyone wants more photos you can go to my flicker account: https://www.flickr.com/photos/186003175@N04/
Both trucks run & drive, but the silver one has slipped liners, as mentioned. Orange truck has always run fine. I think it has 60 something thousand miles. Undercarriage as I said is very nice.
I have no idea what the market value of this lot is worth. I would like to get $5,000 for it. If I can't get that I may hang on to it as a retirement project, or I might wait until my grandsons get old enough to get interested in such things.

the vehicle was not despatched until August 2003 and was one of a number of vehicles sent out as a promo vehicle for the USA to captilize on the 2003 event.

Most of Mr. JLR's email was too large to post. I can forward it to interested parties.

Sorry to hear about your wife’s cancer. I hope she makes a full recovery.
Reactions: Howski

Thanks Blue. I appreciate it.
She has Leiomyosarcoma. Apparently pretty rare and aggressive. But early detection most likely saved her life. So far so good. Up to this point it has been the multiple and unexpected side effects that has given her the most trouble. And recovering from surgery, that was a bitch.

is the disassembly in the photos their current state?

Yes, it is still disassembled. But runs & drives. The bottom photo of the truck in the shed with orange body & silver doors, 1/4 panels & hood the hood open is the most recent photo. Both sets of interiors are included. I never really liked the "pvc" or what ever they called the seat material is. I was going to install the black leather seats from the silver truck when I reassembled it. FWIW.

Someone please stop me from buying this and getting divorced.

Does this include all the missing parts from the photo? You mentioned the seats I was wondering about bumpers, wheels, rack, ladder etc
Reactions: kade

Yes, all the missing parts from the photos are included; rack, lights, ladder, rock sliders, bumpers, two snorkles. two trucks, eight sets of wheels & tires, eight doors, all glass, two headliners that need re-clothed, a new set of NGK plugs & (Kingsborne?) wires, new TB heater kit, two sets of carpets. I'm probably forgetting some stuff. Basically the only thing missing is the original orange hail damaged hood & front fenders that I disposed of. I kept the driver's door original because the damage wasn't that bad on that one & I wanted to keep the VIN sticker original.

Also, FWIW, the guys at RMR told me this was one of about 20 promotional vehicles produced before the regular 200 G4s. Those 20 truck were to go to dealer showrooms to generate interest in the 200 trucks to follow. That is why it is decaled differently from the "regular" G4s and has that G4 Challenge sign mounted between the lights on the rack. Mr. .JLR corroborates this in the email I posted. I always thought that was pretty cool. May not mean diddly to anyone else.

If anyone is interested, let me know & I'll go up there & get additional photos/video of everything, including the undercarriage-that is remarkably clean.

Really interested. Working on a trailer and storage. Saw a 97 or 98 LSE in the background day. I have a ‘98. You have or have had some nice ones.

I had a blue '98 LSE, but I didn't think I had photos of that on Flickr. Where did you see it?
We used to have a big house in the country with lots of space. When my wife got sick, we sold the farm and bought a condo downtown. I now have two underground parking spaces. And a storage unit. So I had to whittle the fleet down. Now I have a Mustang & a Buick wagon. I put the G4 & the silver parts truck in storage hoping I would get it back on the road someday.

Update:
I did not know this but my wife's nephew in the Nashville area is in the vehicle transport business. If anyone, especially in the southeast is interested, I'm sure we could work out a pretty good deal on transporting these trucks.
Last edited: Oct 9, 2021

Aren't you selling all of your hoard for $500k?
Reactions: ERover82

Awww, hi Stu! Hope you've been well!
You must log in or register to reply here.