You are using an out of date browser. It may not display this or other websites correctly.
You should upgrade or use an alternative browser.
K

Hello, This is my first post here on Disco Web
I've gotta thing for these Rovers, I'm on my fifth one, just purchased a 95 D1 3.9L with 5 spd.
How do I narrow down the possible source of a knocking noise (slipped liner, rod or wrist pin, cam shaft walking)? When the engine is warm, I can hear what sounds like a rod knock, the noise goes away above 1500 RPM. My attempts at diagnosing the cause have been to remove the individual spark plug leads while the engine is warm / idling hoping to identify which cylinder had the knock, pulling the spark plug leads had no effect on the noise. Next probing with an engine stethoscope around the individual cylinders did not narrow the location of the noise until I put the stethoscope at the base of the distributor, there I could hear the knock. I've also pulled the oil pan / sump to check the oil pick up tube to make sure it wasn't gummed up, it's clear (motor has 120K miles). It had been suggested by Will T. and Atlantic British that possibly the camshaft is bumping / walking forward and the camshaft wear button could be worn.
So, I've called around trying to find the camshaft button (part #CAM1000), nobody has one, checked Atlantic British, Rovers North and two Rover dealers. Same story, the part has been discontinued and not available.
After pulling down the front of the motor, two things I noticed. One the existing bolt located on the front of the camshaft is just a regular bolt, it doesn't have the nylon button on the end of the bolt (no indicator there ever was one on the bolt). Second, I noticed the timing chain was really sloppy. So I've replaced the timing chain, but what about the camshaft end bolt? Did all 3.9L engines use the bolt with the nylon button? In the second picture with the timing chain removed, there is what looks like a retainer plate, so is that all that is needed?.
What are your thoughts about the possible cause of the knock noise and if it's camshaft end play, any idea on where to find the camshaft bolt with the nylon button.
How can I determine if one or more of the liners are slipping?
Sorry for the long message and may questions, I'm just trying to figure this out.
Thank you, Karl

Stc3620k is the new part #, but you dont need it since yours has the retainer

Drop the sway bar, drop the oil pan, and take a peek

I have the exact same issue - as do many here on the forums I think. Would be great to know what is going on with that. I have read that if it is a slipping liner - there may be a small crack in the block which allows for a little water to get into the cylinder, so if you are slowly losing coolant, it's probably the liner.
I hadn't heard of a walking cam before - so that's interesting. Robert - I assume by dropping the pan and taking a peek you mean that you can see if a liner is slipping from underneath?
R

No. I mean to look at connecting rods

Slipped liner is possible, but highly unlikely on a 3.9.
It is super easy to drop the pan, unbolt the rod bearings, inspect the shells, measure the journals, and likely simply replace the bearing shells if necessary.
OTOH, once I heard a noise from my 95 Classic that I'd swear was rod knock, but turned out a broken catalytic converter.
K

Hey Guys, thanks for the info.
Robertf & PM, I still have the oil pan removed, once I get the front end buttoned up I was going to turn my attention to the rods & bearings. Since I'll be removing the connecting rod caps, is there any reason not to throw new bearings in? I'll measure the crankshaft to determine if stock or turned down already.
Thanks again, Karl
R

If the bearings are worn to the point of causing the knock the rod end is egg shaped. New bearings wont fix that

Measure the rod journals carefully. The manual should have the max numbers for ellipticity and taper and whatnot.
I found that at 250kmi I had less than 10 thousandths of wear, so I just installed new bearing shells and buttoned it up. It's at 287kmi now.
D

If you had a rod knocking it will be blacker than the rest because of heat. But if it was a rod it wouldn't go away at higher rpm.

Last 3.9L V8 I had with a knock ended up being a dead #5 piston. Rings were busted, piston was cracked, and all from some idiot dropping the short valve cover bolt into the engine during a normal upper engine repair (had records of the repair). The shop noticed the boo boo, replaced the head, but they left the damaged piston.....

I found the issue, replaced the piston, piston rings, and the lovely sound was gone for good along with a HG job, valve job, and new lifters. Engine runs flawless now!
Reactions: p m
K

I'm reviving this old thread with an update. After trying to figure out the cause of the persistent knock (new connecting rod bearings, oil pump, timing chain, new valve train rocker assemblies, head gaskets, rebuild heads). I had two well known Rover mechanics tell me they've seen several 95 3.9L motors with cam retainer plates still have cam walk.
So, on the third tear down of the motor, as one last try before swapping engines, I found and installed the elusive cam shaft bolt with the nylon tip. That was it! Engine sounds great and no knock after several thousand miles. I found an original cam bolt at V8 Tuners in the UK (about $80).
Hope this helps someone in the future

KAC said:
I'm reviving this old thread with an update. After trying to figure out the cause of the persistent knock (new connecting rod bearings, oil pump, timing chain, new valve train rocker assemblies, head gaskets, rebuild heads). I had two well known Rover mechanics tell me they've seen several 95 3.9L motors with cam retainer plates still have cam walk.
So, on the third tear down of the motor, as one last try before swapping engines, I found and installed the elusive cam shaft bolt with the nylon tip. That was it! Engine sounds great and no knock after several thousand miles. I found an original cam bolt at V8 Tuners in the UK (about $80).
Hope this helps someone in the future
Click to expand...

Would this be the same for 97 4.0 GEMS? I have a slight knock/tick at low rpm that goes away at 1K+. I know that mine doesnt have the nylon tip on it and worth a shot at replacing. Im also not super worried about it but would be nice to sort that out.

I was chasing a knock in my 3.9 after putting in a Cam. Turns out it was the piston. We ran through everything trying to figure out the knock. I was about to drop the trans to see if it was the flex plate. In the last pic you can see part of the piston in the valley. 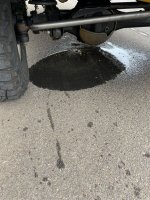 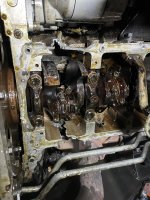 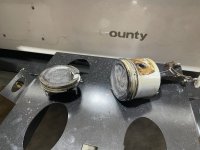 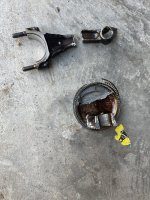 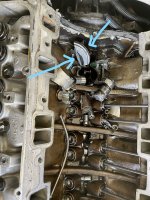 She blowed up real good.