You are using an out of date browser. It may not display this or other websites correctly.
You should upgrade or use an alternative browser.
M

I no longer have a Land Rover. I would like to thank all the Land Rover owners on this forum that provided useful information on how to keep them going and how to do the easy repairs yourself. This forum is a great resource.

I HAVE A TENTATIVE BUYER, so for now it is off the mkt until that sale is finalized. For now I am leaving the original posting as is, below, as the tentative buyer has not had an opportunity to inspect it yet.

I will not accept any other offers, as the tentative buyer has first crack at it. Thus there will not be any bidding.

I am getting rid of my 2003 D2. About 92k miles on it. I bought it in 2006 with 32k miles. Located in Madison WI. Color gray. Very close to stock, modifications from stock are all identified below.

Why is it for sale? Underneath there is a lot of rust. The shop that did all my work after the warranty expired said that they do not want to work on it anymore, as they feel that the amount of rust on the frame and brake lines makes it unsafe to drive. Visually, when you look at the body when standing next to it, it looks nice. But underneath is where it does not look so good. For past few thousand miles I have heard a clunking noise underneath, presumably related to the rusting out. Madison WI snow removal staff use a lot of salt on the roads in winter, thus the rust.

I retired over a decade ago, I used to commute with this but now I average less than 3k miles a year. That is why the low mileage on it. Most of my miles in recent years are highway miles, as most of my local errands are done on a bicycle during warmer months. But I drove it for daily errands in winter on the salted streets. I have bought a replacement vehicle, the D2 is no longer licensed to be driven on the road.

Located in Madison, Wisconsin. I think the ideal buyer would be a scrap yard that wants to part it out, as the engine and drive train is pretty good. Or, if someone had a high mileage D2 of the same or similar year and specification and wanted a donor for parts. Or, if someone was really good and frame restoration, maybe this could have some more life left in it.

Seeking best offer. I noted above that it is no longer licensed to be on the road. But if there is a local buyer, I would be willing to drive it to the buyer location if it is close by, say within 25 miles. And if a potential buyer wanted to see it be driven to make sure it works, we can do that. But being unlicensed and uninsured, I would do the driving.

I am not going to part it out. It all goes at once, not bits and pieces. I live in a condo complex, anything here has to be driveable.

Because there are some good parts on it, I would hate to have it go to a crusher when there are D2 owners trying to keep them on the road. If anyone knows of a yard that disassembles D2s to sell the parts near Madison, WI, I would appreciate knowing who they are. I can identify a few from used Land Rover parts listings on Ebay. If I do not hear from anyone within a week, I plan to start contacting scrap yards within 100 miles that I identified on Ebay that sell used Land Rover parts and if that does not work, list on Craigslist.

More detail on the vehicle as follows:

Original owner was Enterprise Car Rental according to the Carfax when I bought it. I suspect that is why it came without a receiver hitch. I bought and added the Land Rover receiver hitch.

Three amigos came on during warranty, the traction control anti lock braking unit was replaced under warranty and has never had the three amigos since.

It is a 2003, as far as I know it has no CDL. When I bought it in 2006, shifting to low range was very difficult, I suspect the prior owners never shifted it. And soon after the warranty was up, I tried to shift it into low range and something snapped, the lever moves freely. I do not know what is wrong, I suspect broken linkage. It will not shift into low range.

A local shop did head gaskets around 25k ago. Since then it uses roughly a quart of oil per thousand miles, not sure if it is mostly leakage or burned, but I do not see a cloud of smoke when I drive. And did upstream oxygen sensors a few years ago. I occasionally get a P0430 code, but that is usually when I drive a long distance and I get the code soon after getting off the highway.

I had grease zerks added to the front drive shaft, that was years ago I do not recall if they made a new shaft or just changed out the U joints. Reading of stories about grenading transfer cases pushed me to have that done on the drive shaft when there was no hint of trouble.

Base model, 16 inch alloy wheels. Some of the rims leak air, some faster than others. Rubber is good, changed the tires at Discount Tire about 25k ago. I changed the size to increase sidewaall height by a half inch. I flipped the rear tire carrier so that the bigger tire fits on back and clears the rear bumper.

I added the rear roof rails that extend the roof rails from front to rear so I could put a Yakima rack on it for my canoe or kayak.

I have both keys, both electronic key fobs work. One key fob, I broke the plastic shell and replaced it with a generic one that has no brand name on it but otherwise it looks identical to the Land Rover key fob.

Over a decade ago the rod in the driver side door key lock mechanism that has some fins on it broke. Replaced that with a 10 penny nail in accordance with some of the advice I got here on this forum.

Had brakes done all around a few years ago.

At one time on a spur of the moment I bought the ladder that is attached to the rear door, but I never had a full roof rack or anything like that. It is an aftermarket ladder. That now has some rust on it.

There are some cracks in the driver seat upholstery, seats are not leather.

Occasionally I replaced a part myself under the hood when my OBD2 reader and this forum told me what part to swap out. But anything more complicated was done by a local independent shop.

The 12v socket in the cargo area is always on, not only on with ignition. If I recall correctly, I had to connect a white and green wire to do that under a fuse box under the hood. If a buyer wanted to reverse that to original, we can do that.

There is an accident on the records, over a decade ago someone rear ended me, it took out their grill and hood but did not even knock the rust off of the receiver hitch. I declined their offer for any repair or compensation as I saw no damage but they did file a police report so there is an accident report on file.

Several years ago someone on Ebay sold me crossbars that they said would work on the roof rails. Apparently they were for a different year and do not work on the 2003. I have no use for them, they are included.

I have been thinking for over a week on everything I could say to make this a complete list of things a potential buyer would want to know. And I have run out of things to say. As noted above, in a week I will broaden my search for a buyer to local scrap yards.
Last edited: Nov 20, 2021

I'm only about 45 minutes south of Madison. I sent you a PM

Just in case anyone is curious, George was kind enough to send me some pictures. Now I know why the shop refused to touch the truck any longer. It's unfortunate because the rest of the truck looks great. If anybody decides to pick it up for parts, please let me know. I need a few things that I could grab before it goes away. 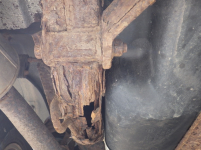 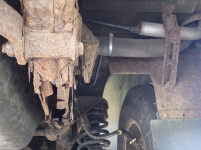 Wow. That is an impressive amount of corrosion.

Cheers and come back soon. At least a piece of it will live to die another day
You must log in or register to reply here.

J
Help with registering a discovery without a title