99D2. 162K. Backstory. Thermostat on my OO D2 went out, left me stranded 35 miles from the house. I call my Son (99 D2) to bring me a new, thermostat from the local auto parts store. 15 minutes later, we're on the interstate home, and weird as it sounds, his thermostat goes out on the way home.

The truck was gifted to us from friends (non mechanical types, tired of the constant trips to the repair shop) and after doing the HG's initially, I could tell the heads had been machined previously given the how tight the lower intake was while torquing.

Knowing the heads can only take two machining's, and having an extra set of new bolts/gaskets in the garage, I did another head gasket repair hoping the heads were still good. I even attempted to "gauge" the heads with my my best straight edge/aluminum level.

Having a D2 head gasket job down to about two/three after work evenings worth of work, I gave it a shot.

The results: P0305 Cylinder misfire, and the 99 D2's 4.0 sucking the coolant reservoir dry as evidenced by the cloud of white exhaust pouring out the back. Pull the #5 plug and yes, it's steamed clean. My bluetooth scope sees direct evidence of coolant in cylinder #5 as well.

I didn't see any cracks in either the heads, or the cylinders when completing the last HG repair. The liners looked good as well.

TLDR: I got coolant in cylinder #5.

Courses of Action in progress:

1. Leak down test kit in in the cart for purchase.

2. Got a line on a near buy $400 parts truck that "supposedly" has only had one HG job. I can pull heads, and other parts for later use, then get my money back after scrapping the carcass at my local metal recycler.

Questions for the hive:

1. Could a bad valve seal be the culprit?; if so, doesn't make sense to me.

2. What are your tips/tricks for sourcing/gauging heads from auto salvage yards?

thanks in advance ya'll.
11b4v 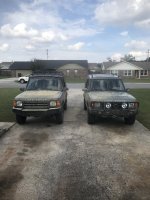 coolant in 2,3,4, or 5 is almost certainly cracked block.
Reactions: WILL.TILLERY

Some possibilities :
Head or block surface isn’t perfectly flat.
Surfaces not clean
Gasket had a defect

If nothing appears obvious when you remove the heads, have them checked.
While the heads are off, you can make little plates to cover all the water passages in the block except one. Then put 10lbs or so of air to it and a little soap and water to check for leaks/bubbles around #5. Specifically, check the seam between the liner and block.
Last edited: Dec 19, 2021

There are no coolant passages that a gasket seals on cylinder 5, so either the block is cracked or the head is cracked. I’ve seen one cracked head and hundreds of cracked blocks.
Reactions: ukoffroad and WILL.TILLERY

was that cylinder washed prior to your hg job? that is the typical failure one but if not you may have an issue in the repair/head.

good advice ya'll, and yes Will, I seem to recall that #5 may have been washed before.

leak down test next.
You must log in or register to reply here.

H
Blown HG - What could cause this?